The Challenges and Responsibilities of Journalism Today 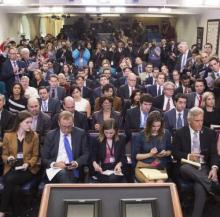 On Thursday April 4th at 3:30 P.M. the Policy Lab will be hosting an event on “The Challenges and Responsibilities of Journalism Today.” At this event three leading journalists - David Cay Johnston of the DC Report, Emily Flitter of The New York Times, and James Henry of American Interest - will discuss the challenges and responibilities of being a journalist in an era of misinformation and rising tensions between the press and the White House.

This event is open to the public. It will take place in the Policy Lab at 77 Prospect St. This event is made possible by the Poynter Fellowship.

David Cay Johnston, a 2001 Pulitzer Prize-winning investigative reporter, is author of the four national bestsellers, the most recent of which are “It’s Even Worse Than You Think: What the Trump Administration Is Doing to America” and in 2016 “The Making of Donald Trump.” Johnston is co-founder of DCReport.org, a free non-advertising news service that covers the Trump White House. Johnston has been covering Trump since 1988, when he was a major figure in Johnston’s exposé of the casino industry, “Temples of Chance.” The Washington Monthly calls Johnston “one of America’s most important journalists.”

Emily Flitter has been a banking reporter for The New York Times since late 2017. Before joining the Times, she spent eight years at Reuters News covering Wall Street, white collar crime, the Trump campaign and environmental issues. For the Times, she has written about Goldman Sachs’s role in the looting of a Malaysian sovereign wealth fund, Wells Fargo’s lingering high-pressure sales culture, an investigation into Japan’s largest bank over money-laundering controls and a cover-up of bad behavior by a wealth manager at Morgan Stanley. She also obtained records showing Jared Kushner has been able to avoid paying income tax several times over recent years.

James S. Henry, Esq. is a leading economist, attorney, and investigative journalist who has written and spoken widely on the issues of tax justice, financial secrecy, offshore havens, and development finance. He has served as Director of Economic Research (chief economist) at McKinsey & Co. Mr. Henry is a widely-published investigative journalist, who has travelled to more than 50 developing countries. His articles have appeared in many leading publications, including the New York Times, the Washington Post, the Wall Street Journal, Business Week, the Nation, and the Economist. He is regular contributor to the American Interest, whose recent stories about organized crime, Russia, and the Trump Administration have received widespread attention. He is a featured contributor and Senior Investigative Editor of DCReport.org.