“Writing for a Public Audience” with Julia Azari 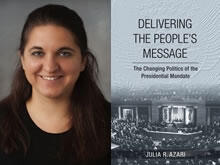 On Friday, March 19, ISPS and the Policy Lab hosted a policy-related skills training workshop on “Writing for a Public Audience.” The session was led by Julia Azari, who is Associate Professor of Political Science at Marquette University and the author of Delivering the People’s Message: The Changing Politics of the Presidential Mandate (2014, Cornell University Press). Drawing on her research expertise in the American presidency, political communication and rhetoric, and political parties, Professor Azari writes regularly for the data journalism site FiveThirtyEight and the political science blog Mischiefs of Faction. She spoke to an audience of undergraduate and graduate students about her experience as a public-facing scholar and offered advice on all aspects of that process. The event was moderated by John Dearborn, a Postdoctoral Associate in the ISPS Policy Lab.

Professor Azari began by discussing why one might want to pursue public-facing scholarship, describing her own experience of beginning to write for Mischiefs of Faction, FiveThirtyEight, and other outlets. As she explained, “The creation of knowledge should end with people knowing it.”

In her case, this initially meant trying to place short pieces related to her 2014 book on presidential mandates, Delivering the People’s Message. For example, the appearance by then-President Barack Obama on Zach Galifianakis’s online show “Between Two Ferns,” with the purpose of promoting the Affordable Care Act, offered Professor Azari an opportunity to provide perspective on how presidents utilize different media forums over time in a guest piece on the political science blog, The Monkey Cage: “How Obama’s ‘Between Two Ferns’ appearance compares to FDR’s fireside chats.” With presidential politics getting more interesting in anticipation of the 2016 election, Professor Azari then had the opportunity to join FiveThirtyEight, as its editor was seeking political scientists who could write clearly for a wide audience.

Professor Azari offered several ideas about how one could go about thinking of topics and new perspectives to offer in public-facing work.

To start with, a writer should think beyond just what happened in a particular political event. Instead, one should ask what kind of category a particular phenomenon belongs to. Does it play out similarly or differently depending on geographic or historical context? For example, Professor Azari was able to place Donald Trump presidency in context by comparing his leadership style to other nineteenth-century presidents: “Donald Trump is a 19th-Century President Facing 21st-Century Problems.”

Another angle for a writer would be to respond to dominant narratives in the mainstream media. As Professor Azari noted, blogging and data journalism emerged as a response to several problems. A particularly important one is the issue of causality, as assertions about causality made in the media are often not supported by evidence. For example, the media might routinely suggest that term limits for members of Congress are desirable, while the evidence from political science research would suggest this is a bad idea. A scholar can carve out a space that takes these claims seriously, explains the nuance, and invites people into the scholarly conversation. Different schools of thought on an issue can be described for a broader audience in clear terms.

Professor Azari next described a few ways that a scholar could think about their unique contribution to a public debate.

First, what is a thing only you yourself can say? If you are a scholarly expert on a particular topic, that is when you can most easily contribute to help a wider audience understand some sort of political phenomenon. Professor Azari especially noted that this is when she would encourage students and early-career scholars to do public-facing work, since these opportunities would allow you to clearly communicate your expertise. A scholar at a slightly later stage of their career might be able to take a wider view of topics to write on. For example, perhaps you have taught several major literatures in your field, and you can help orient a reader to what the major debates are.

Second, perhaps you can offer a story from your research. One perspective might be to explain what your expectations were for your project (such as a dissertation) when you started and how your research met or departed from those expectations. Another could be to utilize an illustrative story from your research. For example, Professor Azari described how her examination of letters from southern Democrats to Democratic party leaders in the mid-twentieth century provided a unique perspective to see how party leaders managed different parts of a coalition.

A key part of writing for a public audience is timeliness, but Professor Azari explained that there are two ways to try to deal with the news cycle. One approach would be to attempt to time a piece for a major event in the news cycle. This is especially possible if one already has a lecture or related piece drafted on a given subject; otherwise, you would have to figure out how to write 900 words quickly and clearly. But more often, issues that you might care about as a scholar are lasting in importance.

So instead of focusing on what the current news cycle is, you can focus more on a key idea or issue. Professor Azari described her “rule of three” as a way to approach this, and she offered several ways that a scholar might frame a piece in these terms:

For a good example of this framing in her work, see her FiveThirtyEight piece (with Perry Bacon, Jr.) on how “Trump’s Use of Tear Gas to Break Up a Protest Undermined Three Core Values of American Democracy.” As Professor Azari emphasized, a scholar should be open to the possibility that a piece will evolve, but it helps to start with a general set of guidelines.

Clarity and precision are valued in both academic and journalistic writing, but here too there are some key differences. As Professor Azari explained, academic writing often involves the use of expert terminology, investing in precise concepts. By contrast, journalistic writing values accessibility. So one of the key parts of the writing process on a public-facing piece is to work with an editor to balance both conceptual precision and accessibility. Professor Azari also recommended saying something out loud in order to make sure it makes sense.

Professor Azari also offered her perspective on developing a unique voice through public-facing work. As she noted, an expert has the opportunity to take a posture of humility, inviting people in to learn more about a political issue. And by writing multiple short pieces over time, a scholar can effectively engage in a years-long conversation with readers. For example, in addition to her work on the presidency, Professor Azari has often written about both political parties and norms in her scholarship and public writing, as in these pieces:

Another question asked about how to effectively pitch a short piece to an editor. Professor Azari explained the importance of having a key sentence explaining the topic, one that a non-expert with no familiarity with your work would clearly understand. That sentence also needs to have some energy to it, as journalism values originality and provocativeness. She also explained that a scholar can briefly say how they researched the topic at issue and provide “a nugget,” a vivid example or insight to interest the editor.

One example Professor Azari provided was on how one might pitch a piece about polarization: “Everybody thinks one thing causes polarization. Here’s the actual cause. And here are my credentials to make this case. Here’s what I will argue.”

Professor Azari also offered her thoughts on the variety of formats that exist for public-facing writing.

Blogging tends to focus on correcting dominant narratives. As Professor Azari explained, this format allows a scholar to get into the weeds and offers freedom to explore a topic in depth. For an example of such a blog post, see her interpretation of politics in 2020 at Mischiefs of Faction: “The year everything changed, and nothing did.”

Data Journalism pieces would use data to make a particular point, such as many pieces at FiveThirtyEight. Professor Azari encouraged undergraduate and graduate students to think about investing in quantitative skills. For example, see her piece on presidential mandates in FiveThirtyEight: “Presidential Mandates Aren’t Real, But Congress Sometimes Acts As If They Are.”

Op-eds are used to make a very simple and provocative argument. Professor Azari explained that this format might be especially attractive for those interested in policy and advocating for particular policy proposals. For an example of this from her own work, see her Washington Post op-ed: “It’s time to switch to preference primaries.”

Long-form essays can allow a scholar a greater opportunity to dive into relevant history. For example, Professor Azari has written pieces in this style for Politico Magazine, such as: “Why Hasn’t the Republican Party Collapsed?”

Writing for a public audience also offers benefits to a scholar’s own interests, as Professor Azari explained. It can assist with furthering a book project. It can help you engage with other academics or non-academics on a topic and to exchange ideas. It can force you to learn more about other literatures. And it can help you think about and express your ideas in their broadest form.

The Demand for Public-Facing Scholarship

Professor Azari closed her talk by reminding the audience of a few things that are underestimated by scholars. First, scholarly work has a vividness and humanity that should be shared with a popular audience. Second, there is a real appetite for more academic takes in the public sphere. As Professor Azari put it, “there is a public for nuance, ambiguity, and humility.” Ultimately, she explained, offering those kinds of perspectives “benefits American democracy.”

Authored by John Dearborn, Postdoctoral Associate at the ISPS Policy Lab and at the MacMillan Center, and Lecturer in Political Science